Here is the complete article of all devices that Samsung is launching at the Unpacked event today. That includes the Galaxy Note 20, the Note20 Ultra, the Galaxy Z Fold 2, the Galaxy Buds live, the Galaxy Watch 3, and of course the Galaxy Tab S7 and S7+. 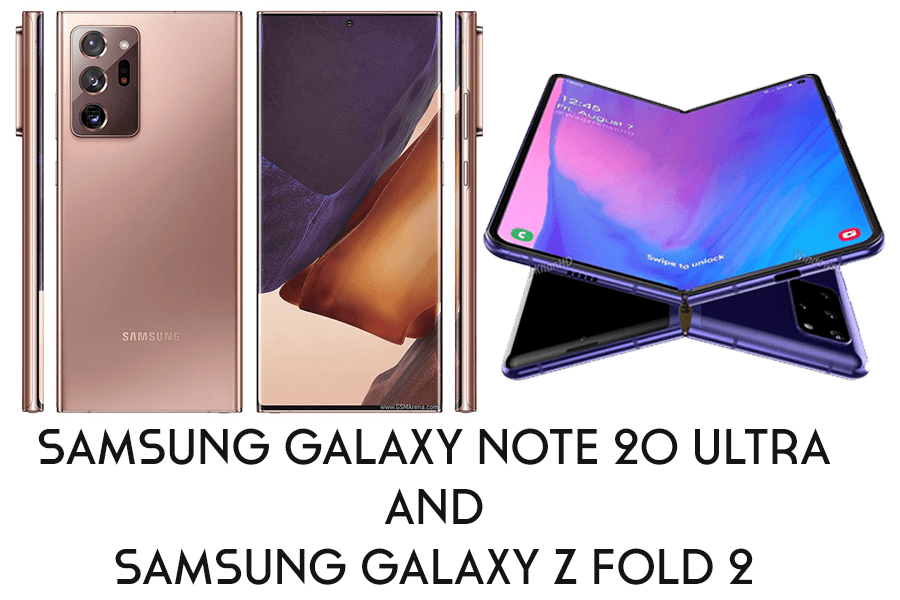 Samsung isn’t exactly the bucking industry trends with the design of the Note 20 Ultra. It has a 6.9″ dynamic AMOLED 120Hz LTPO display, that will make sure to offer you the best display experience on any smartphone out there.

It’s also thinner than the S20 Ultra which means it’s going to feel good in the hand. The camera is everything the Galaxy S20 Ultra but perfected in a lot of ways. The phone will not have the autofocusing issues the S20 Ultra had, you can record videos at 120fps at 1080p. Samsung is also giving an option to record21:9 videos both on 8K resolution and on other standard resolutions.

The 108MP is the highlight followed by the50x zoom camera. Samsung has also teamed up with Microsoft to bring over 90 Xbox games to the Note 20 Ultra via xcloud.

You need a controller to stream those games, by the way. You can also connect to DeX wirelessly this time and can use your phone as a trackpad on your TV or any other monitor.

Samsung has also built a UWB chip inside the phone so you can just point your device at other UWB chip-enabled phone to send files to them. It’s that easy. Remember a few weeks ago I told you exclusively that the S Pen can now record audio while taking notes, turns out that was on point. You can do just that on the Galaxy Note 20Ultra which will come in handy for sure.

Like the S Pen on the Note 10+, the new stylus can do everything the old one does plus it’ll have a 9ms of latency which means the stylus input happens instantaneously. You can also use the S Pen as a pointer which is going to be useful at times.

Now coming to the Galaxy Z Fold 2, this is going to be a game-changer. Samsung has improved the Z Fold 2 significantly over its first generation. They have eliminated that big notch on the inner display and has introduced the punch hole cameras both on the inside and outside the display. Speaking of which, the outside display is bigger and edge to edge compared to the smaller ones on the original fold.

Here are the screen sizes, and interestingly Samsung has decided to use 120Hz display on the inside and 60Hz on the outside display.

The cameras look like the Note 20 Ultra’sbut the configuration is similar to the S20+. Next, the Galaxy Tab S7 and S7+ will follow the same design language of previous Galaxy Tab hardware but will come with some impressive internals. Those are the Snapdragon 865+ chipset, between6 and 8GB of RAM, and 128 and 256GB of internal storage. It comes with 45W charging support that will also be available for super-fast battery top-ups.

Moving on, the Galaxy Buds live is one of the interesting wearables I’ve seen so far. It has a baffling bean-shaped design and at first, I didn’t like it but it has grown on me ever since. It has active noise cancellation something we don’t have on Galaxy buds. Samsung has also given rubber ear tips so that it doesn’t fall off from your ears.

Finally the Galaxy Watch 3, Samsung has brought back the rotating bezels and skipped the Galaxy watch 2 monikers. So that people don’t get think it’s an inferior product since we already have the Galaxy watch active 2 around.

It has everything the watch 2 active has, the voice commands, speech-to-text, the upgraded health-tracking features, and of course the rotating bezels. Of course with that being said, do consider subscribing for all the latest updates on smartphone tech and as always I’ll see youtomorrow…peace out!

Pocophone 2 Upcoming Features and specialty in 2020