Home » Blog » How to Show Battery Percentage on Android Phone: All Methods

How to Show Battery Percentage on Android Phone: All Methods 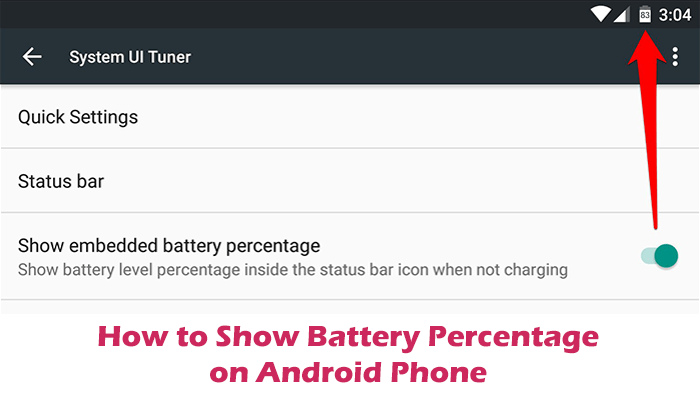 This fully detailed article covers that How to Show Battery Percentage on Android Phone. Everyone has a smart-phone at this time of chaos. Everyone is taking some work from their phone. Some people use it to talk with their loved ones and some business people use it to solve their business problems.

It is obvious that you have to take care of the battery at such time. In such situation you would definitely want to know how much percentage of your battery has left.

Most of the time android’s battery percentage is not shown on untouched OR brand new smartphones. When you buy a new one in 2019, this feature doesn’t enabled by default on various versions like Android One, Lollipop, Nougat, Oreo & Pie etc.

But you can enable this useful feature by yourself within few seconds. This article will be much helpful for folks who aren’t aware about this option and don’t know how to Show Battery Percentage in the Status Bar on Any Android Smartphone.

How do I show my battery percentage on home screen?

As you know Battery Percentage Status in Status Bar is much useful in your daily life, if you are using an android smartphone. Because by enabling this option you can easily figure-out your battery draining and charge it with time. So, in this article i will guide you step by step with the help of images.

Note: This detailed article covers approximately mostly used android versions from Lollipop (5.0) to Pie (9.0) in 2019. So, according to me, it helps all almost all type of smartphones using android.

Android Lollipop is called Android 5. It is also known as sweet new take on Android. It has advanced options and much improvements than the previous ones. 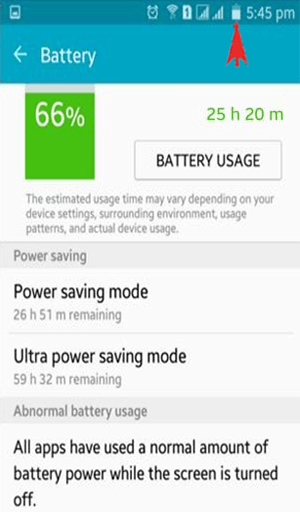 Before enabling battery percentage on home screen on android lollipop, you can see above that how your mobile’s homescreen looks before enabling this feature.

1: Go to “Settings”
2: Scrolling down by your finger until you see “System section“, now tap on “Battery” 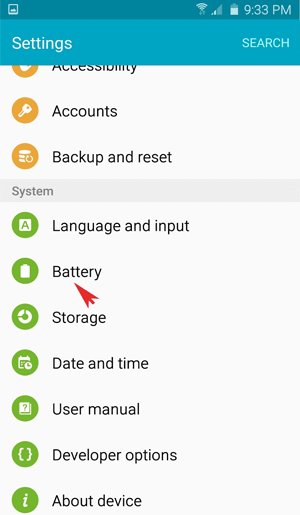 Here you will find “Show power on status bar” option under the “Remaining battery power” section. It will be turned off by default. 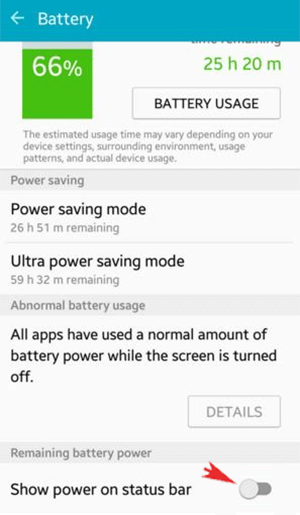 3: Now, you have to enable or Turn on the toggle button “Show power on status bar”

You are done, now you can see battery percentage in Android Lollipop version at home-screen. (example below screenshot) 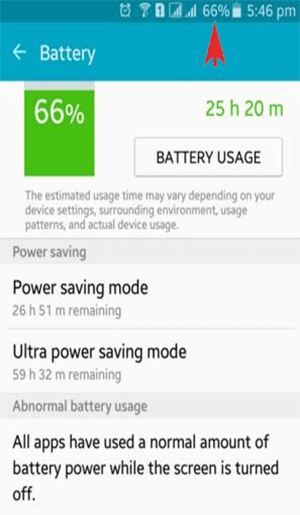 Android Marshmallow is known as android 6. It is the version where the new era of technology begins with its fastest and advanced features that you can only imagine.

1. Before doing any step, first you need to enable System UI Tuner on your phone on marshmallow, that gives you access to the hidden settings in Marshmallow. For this you need to swipe down the Quick Settings Panel of your phone and long press on gear icon like the below screenshot. 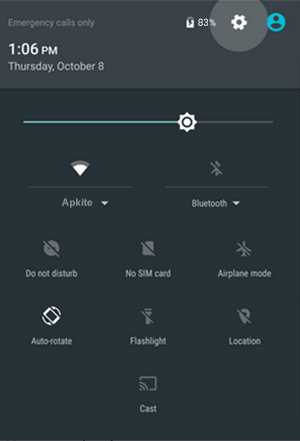 After few seconds like after 3 to 5 seconds. You will see a notification saying this “Congrats! System UI Tuner has been added to Settings” 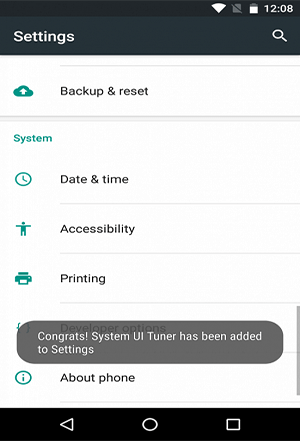 2. Go to “Settings”, then scroll down until you see “System UI Tuner” under System section. Kindly tap on it. 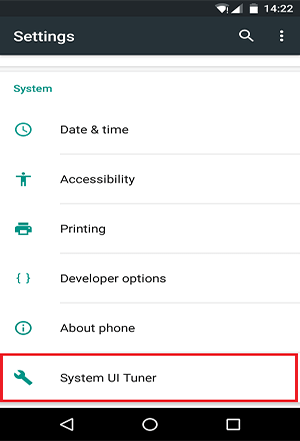 3. In System UI Tuner, you will find an option like “Show embedded battery percentage“. 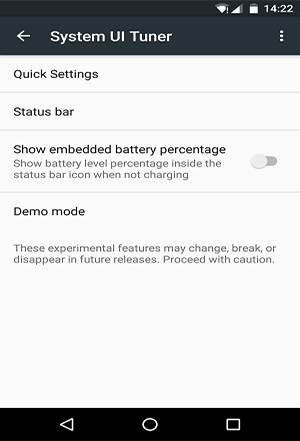 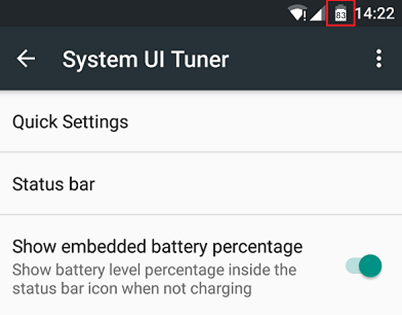 After doing those steps you can see the battery percent. bar display on Marshmallow.

Android nougat is also known as android 7, 7.1 and 7.11 etc. it comes with more than 1500 emoji including 72 new ones and Multi Locale language settings.

Users can also switch between apps with a double tap, and smoothly run two apps side by side. Nougat is the sweetest release yet by and-roid.

And-roid 7 comes with Vulkan™ API which is a game changer having high-performance 3D graphics.

1. The first step is to enable System UI Tuner, if you do not know how to enable it then kindly read table of contents reference 1.2.1

2. Open the System UI Tuner menu and tap “status bar” and Towards the bottom you will find an option “Battery” 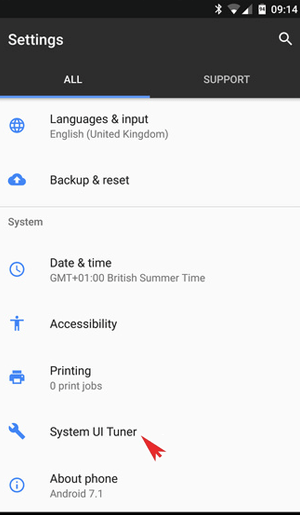 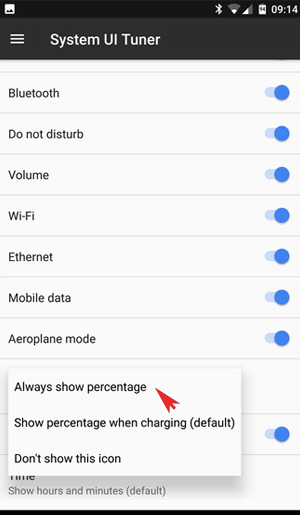 You did it. Now you can see this indicator on your mobile.

Android Oreo is known as Android 8 which is 2x faster than the previous versions. Android 8 helps you to minimize background activity in the apps you use least.

It includes the option “Picture-in-Picture,” meaning you can see two apps on your smartphone at once.

Oreo 8 comes with Android Instant Apps, which allows users to teleport directly from your mobile browser to new apps, and no installation is required. 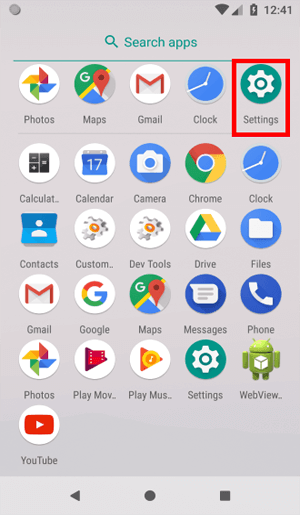 2. Swipe down until you see “Battery“, kindly tap on “Battery” 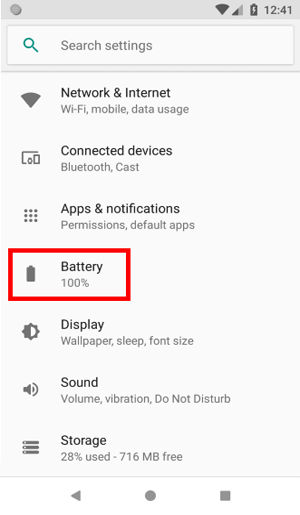 4. Switch the toggle button to enabling it. (Example image below) 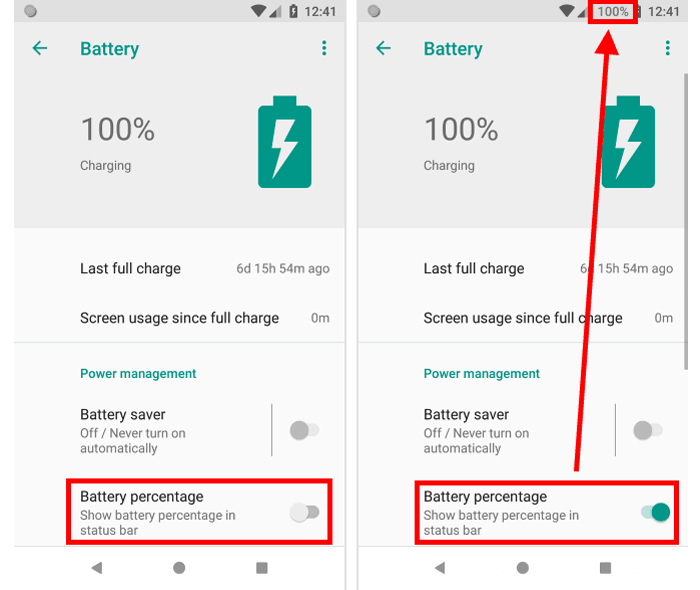 You are done. Now you can see on above image.

Android Pie is also called Android 9 and it is currently the fully latest version of android devices. And-roid 9 is much smarter, faster and perfectly adapts to your mind.

The version Android Pie uses artificial intelligence (AI) to give you more from your phone.

9 pie includes Adaptive Battery that’s mean you do not need to worry about smartphone’s battery draining as you can learn how to use your phone smartly with pie. 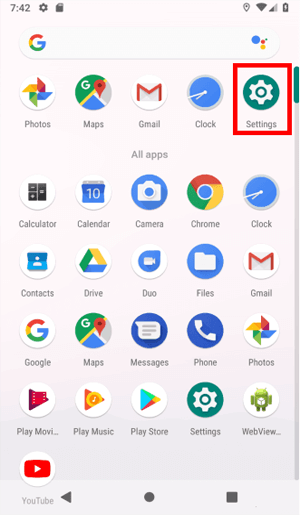 2. Swipe down until you see “Battery“, please tap on “Battery” 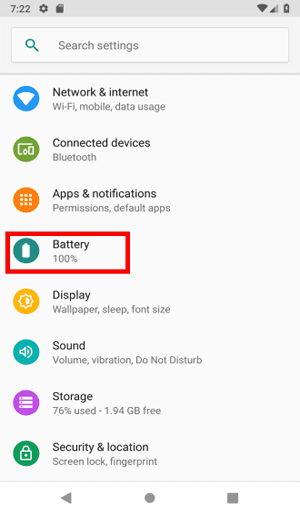 3. Now you see “Battery Percentage” under the section of “Power management”

4. Switch the toggle button to enabling it. (Example image below)

This article is all about How to Show Battery Percentage on any Android Phone. But remember that in some cases methods will be bit different because of custom changing in android open source software(s) like on samsung mobiles etc.

But most of the android smartphones has same methods. If the above methods did not work on your mobile, then kindly comment on this post.

Top 12 Best Video Editing Apps for Android in 2022 FREE: Edit Like a Pro